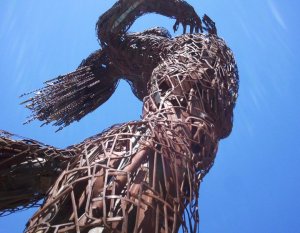 The Now:  Many have spoken on this collision of past and future waves that observing the experiences in total awareness brings richness to being.  Certainly I believe this to be true, just as the infinite expansion of an electron speeding along in space-time, and in an instance, observed as a singularity can be powerful concepts in stilling the mind.  I note with a lower delta to begin this brief treaty, a modality to consider if the cup is half empty or full.  Is it a measuring of infinite expansion, captured and manifest?  Or, the infinitesimal detail of a singularity? In reality of consciousness, both are leveraging perspectives to yield manifested results.

I mark Ajna each morning with the lower case sigma to remind me to be in the Now.  Present.  Focused.  Being.  As the Dirac Delta function implies:  ∫δ(x) =1.  I view this profusely used mathematical construct as the embodiment of ARARITA.  The Now is the Unity experiencing the Unity invariant of space, time and the event.

The Moment:  It would be my desire that everyone has felt it.  That instance when the harmony rings in your ears.  The perfect (P)lace, (P)eople and (P)urpose intermingle in the Now.   Bam!   “The Universe is yours!” roars through your heart.  For me that is the Moment, the observation and execution of Will at its fullness.  In an awakened society, this would certainly be guaranteed by the great transformer, Death. Every human had conjoined in communion with the Universe, and in harmony with the I, Absolute, the Moment is chosen.  Yes, Donnie, everyone dies alone, because you are the Moment at the Great Transformation when all creation is one with your Will.

The pursuit of that awakened society is Now, and the Moment to strike at Religion as an outdated technology has watershed.  I look to the global community of the Earth to dialogue in the multiples of consciousness and find harmony.  This conversation providing the necessity of Belief to no longer be an opiate, but undermined to a new enlightenment of balanced Science and Art of Consciousness whose fundamental axiom is of Joy and Bliss, not that manifestation is suffering.  Faith is the noting of a Hypothesis regarding an Unknown.  To test the fullness is to know revelation, Apocalypse, i.e. the dissolution of the question, by knowing in fact.  Mystery is not a secret to be held over others, but the exhilaration of exploring that Unknown.  Hope is envisioning the potential of any factor in creation, but taking Action for the Manifestation to become Being is a mandate.

The End:  It is always happening.  Each of us is always experiencing, a closing and opening.  Sometimes an End is one of specific intent.  For instance, on this morning of a new Moon, I resigned from the Board of Trustees of a Brotherhood I have been with since its creation.  I have chosen not to leave its current, but the interaction will never be the same.  And, yes, there are the unexpected ones.  A kiss from a lover with “See you soon” as the parting words, yet circumstances would lead the intimate interaction as the last.  I am not sure which strikes at the heart deeper.  Neither seems to have enough anesthesia to dull every component of sensation, but that ache drives us to find the next beginning,

We as a planet are here.  An end of an Age.  Whether you want to discuss the esoteric nature of Revelation, the calendar ticking to 2012, or the hard science that the non-linear system of our environment is shifting to a new local point; this cascade is unable to be stopped.   Humanity’s first awareness must be that the Earth will flourish onward, either from a new approach to Life where humanity is a part a shift of paradigm of consciousness; or the species transformed to another form, but as homo sapiens sapiens is extinct.

The Epoch of Bliss and Joy is herald, Azurexe embody unveiled of title, and those who have sight may hear.

Concise awareness of Person, Place and Purpose recognizes the Perfection of every Moment.

View all posts by lovejoybliss